The Sound of Silence

A few weeks ago I realized I was spending too much time on gadgets---phone and computer.   I decided to give it a rest.   So I let my friends know that I was going out of range for a week.

I thought it'd be hard.  Nope.  I thought I'd go a bit stir crazy.  Nope.  What did happen is I got TONS done.  Tons of art, tons of riding, and even more contemplating.
It was relaxing and energizing at the same time.   It was so good, I plan another soon.   But in the meantime, here's what I was working on.   Actually, its a *part* of what I'm working on, as I don't want to show the whole thing til its done.

It's a commission from a very fun lady from Tennessee.   Ms. B asked me to do an 18x24 painting of her husband, his son, and their labs, out hunting during a hoar frost.   The challenges of this piece are first, the orange!  Not a color commonly found or used, and can be tricky to work with.   Second, that frost is also tricky, really messes with the values that are normally found.

Ms. B did provide fantastic photos to work with however, and I'm happy about that. 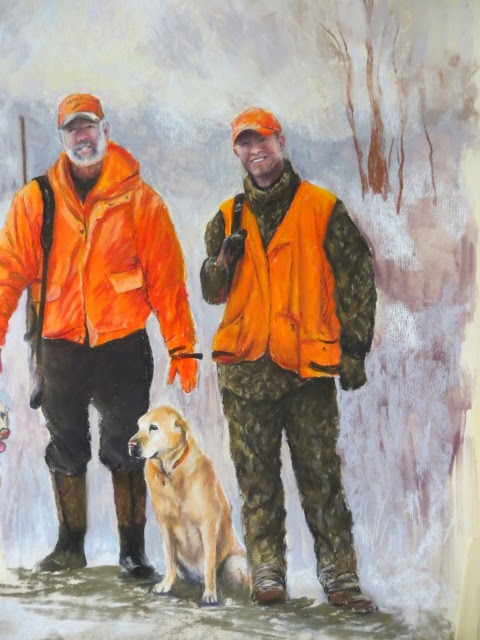 I'm working on Uart 600, with an underwash, that you can see bits of in the background especially.

Posted by Pastel Chris at 6:19 PM No comments: