I am not turning into a Boy Scout here, I am not a boy for one thing, and a bit past the age limit as well!  But their saying has a lot of merit.

This week I received a call from an artist friend who is in charge of a gallery space.   There was no one for the November showing, and could I do it?   This space holds at least 25 paintings!   I gave a quick look and yes, I can do that!   I will need to frame some pieces, and finish the one on the easel, but at least that's do-able.

This means that even though a month ago I had no need to have such an inventory, its a good idea to be ready anyhow.  Which means working.  Often if not daily.   When I might not feel like it so much.


“Amateurs look for inspiration, the rest of us just get up and go to work.” – Chuck Close
Not that its easy.  I find myself late in the day far too often, wondering where my time went?   I can easily "just one more chore..." myself to bedtime.   Its hard to do at times when I see nothing coming up, but just that quick something can come along to flip things upside down.   I am happy I was prepared enough to say yes!

Old Feed Store Art Center, Bassett Nebraska.   I will have at least 25 paintings on display and for sale, for the entire month of November.

Posted by Pastel Chris at 11:13 AM No comments:

Dubuque Paint Out and Artists' Block

I am finally getting back to normal, or as normal as I get!   I was juried into a larger paint out than I've ever done before.   After the DeSmet paint out that I've done several times, I also decided up upgrade my painting set up.   Easier said than done!  Took 3 tries to find what felt right for me.

This paint out, called "Bluff Strokes", for all the bluffs in the area, was back in Iowa near where I grew up.   It was also a full week long!  So off we, Arty and I, went.   The first few days I was flailing terribly.   I just couldnt' get the art to flow.  Argh, a really bad time for an artist block!   And the more it is a struggle, the more tense I get.

Then I was going into the city of Dubuque, which is very hilly--and I could no longer deny that my tahoe was having difficulties with the brakes.   Feeling pretty defeated, I called my folks and they came to my rescue.   The next morning I was sitting in their fix-it shop, getting an entire brake job.    As much as this seemed a set back, it rather Re set my mindset, and the rest of my week kept going better.

On Friday evening was the Patron Show.   It was one of the best shows I've seen.  The quality of work, the way it was displayed and the live music was awesome.   I sold 3 paintings done in the area, and one studio work!  Yes!

Saturday was the public sale, and the end of the event.  As awful as it started, by the time I headed home I was pretty pleased.    I have many nice photos of the area I'd like to work from in the studio when the weather turns, I got to spend time with a long time friend, and my folks.  Arty and I  hiked the Swiss Valley area, which was a wooded area with beautiful trails.

So what does a person do when they get hit with an artist block?  Paint thru it.  Go hiking.  Get your car fixed 🙄    When it hits, it feels as if I will never be able to paint well again.  Not so!  Does this happen to anyone else?  I am certain it does!


Several years ago I got a very thin, very light backpack as a freebie at the Belle Forche paint out.   Today was the first time I took it out as a backpack and its perfect!  I've kept this little plein air kit in my car for a few years now, but its so small and lightweight I decided to take it hiking with me today.     I added a cheap rubber-backed rug  to sit on, as I won't be toting a chair into the woods that far, but still don't want a wet keister nor sit on a sticker bush.

The dogs and I headed out around one pm, its very overcast but still warm.  I used a sanded paper to tackle this little scene; I've passed it hundred times and always wished I had my supplies.  I've taken lots of photos of this, and delete them all, they just turn out too dull.   I'll be doing this lots more, so easy and way fun! 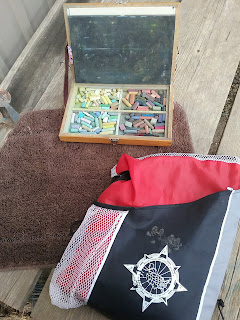 my smallest plein air kit--a rubber backed rug, a very lightweight backpack, and a cigar box pochade.  I used the back of the painting surface for doing the prelim thumbnail.   I also added some a few lines of notes on the back, about the weather, the date, and where I was.   I bring home the little painting in the bag, within the slick pages of an art magazine.
Posted by Pastel Chris at 3:20 PM No comments:

I go walking or riding, or both!, daily.  My little studio mascot, Arty, demands it.   Plus, I love to do so.   This little scene is very near to my home, and I pass it often.   I've taken a ton of photos, and finally got around to making it into a painting.   But it needed just a little...something.   So, the neighbors now have sheep!   Not really but since I remembered to renew my artistic license, I gave them some.

Posted by Pastel Chris at 3:56 PM No comments:

Like most artists, I collect photo reference by the hundreds.   Often when I bring them home, or open the file later, its just meh.   Those get tossed right away.   But sometimes there's enough in it to be kept, some get used right away and some, well, there's good in it, but I just can't see it well enough yet and those get saved til I can "see it better".


I went thru several of these recently and with my photo editing program, along with thumbnail sketches, found the good I knew was there all along.   As much as I am wanting to go out painting, and even with warmer temps, its still awfully drab out there.  I felt the need for color this week!
I really had fun painting this summer day, where you breathe in deep the fresh air, feeling the sun warming and the hearing the birds.   I am longing for summer in all her glory!
Posted by Pastel Chris at 4:40 PM No comments:


Okay, I *should* be sound asleep by now, and I would be except I am on kidding watch...2 of my does had their babies tonight, a mother and her daughter!   Tilly is the older doe, Wendy is her daughter and each had their babies a few hours ago.   I am SO glad they waited til it wasn't subzero!   I will check them a couple times to be sure they are doing well, and that the one remaining preggo isn't giving birth.  The first 2 showed no signs of it this afternoon and when I went to do chores, they had little babies!   :happy dance!:

Posted by Pastel Chris at 10:37 PM No comments:

Last fall I went to Custer Park and got a ton of great reference photos.   I used one of a buffalo cow waiting for her calf to catch up, for this small piece    I'm still experimenting with a more textured surface. 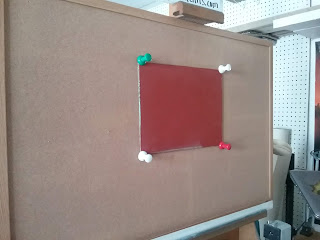 This surface  forces me to loosen up and I like leaving some of the surface color, in this case a deep red, showing thru the final colors.    It gives the work a life and vibrancy, which I think is especially good for a subject like this.

I also found these fun jumbo tacks, that do a dandy job of holding the hardboard panel at my easel.   If I only put the panel on the easel, I struggle getting to the top and bottom and I dont' like feeling penned in.  These allow the panel to be able to move left and right easily, not disrupting me.  It also helps to keep my panel at a level  so I can stand to work, freeing me up a bit more as I prefer to step back every few minutes to check on my progress.
Posted by Pastel Chris at 5:49 PM No comments:


As an artist, getting too comfy in your working ways leads to some ugly stuff--both artistically and mentally.    Add to it these very grey, cold days and yeah, I'm kinda grumpy.   But after a talk with a friend (hey you!) I decided it was time to do some experimenting.

I love my subject matter, and love working in pastel.  So I changed how I was using the pastel and tried a different surface.   It left the finished painting more lively, with energy!   It also gave me an excuse to use some bright colors, which sure helped liven up such a dull afternoon.

I used a hardboard and made my own surface preparation, gritty enough to hold layers of color; applied in such a way to leave some of this showing.   I love how some of the ochre surface shows thru the final piece.   I feel it adds energy and life!   It was also a lot of fun too!
Posted by Pastel Chris at 8:09 AM No comments:

Sketching the winter away 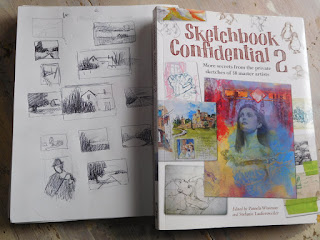 Posted by Pastel Chris at 10:37 AM No comments:

Weather the weather, or not


Today is unbearably cold, so doing anything outside, is out!     But it sure makes it easy to cozy up in the studio for a long time!   Not a bad way to spend such cold, bitter days.

This barn is almost falling down in real life, and is close to a place I taught a workshop this summer.  You know, when the air didn't hurt my face!   I was walking Arty the Wonder Dog early so he'd behave during class time.   I patched up the holes it actually had, and straightened it a bit also... and what makes a barn even better is horses!   Horses always make life better!

This pair of horses are dozing in the early morning sun, are they tired from working?  Are they just lazy pets that eat all day?   Either way, they are enjoying that nap.

The title, "Halfs Asleep" isn't a typo and refers to the type of horse I depicted here--Haflinger.   A smaller draft breed that is always this coloring.   Small but sturdy with good minds.    Their bright manes and tails, with that golden coat help bring out that 'bright, early morning' feel.
Posted by Pastel Chris at 12:51 PM No comments: